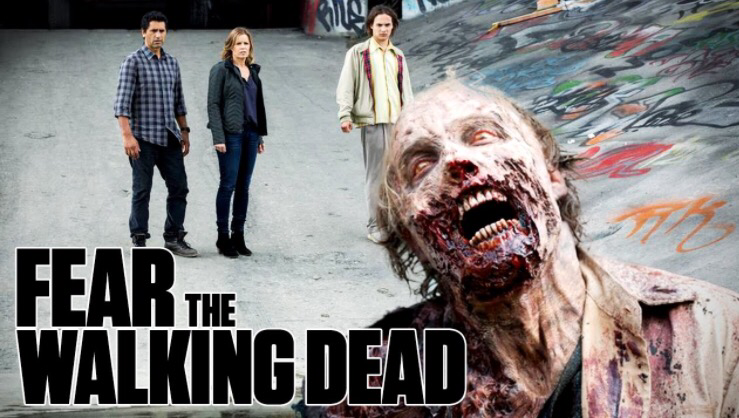 Much anticipated, much talked about, even much maligned.

If you haven’t heard, this show is the companion series to AMC’s The Walking Dead; a post apocalyptic world where the dead prey on the living.

Yes, they are zombies, but the “z” word never is used. Walkers, Biters, Roamers… now the Infected.  It’s not about them anyway, really. The show is about survival. Not just survival without wifi and smart phones and Facebook…  and grocery stores, electricity and medicine.   Survival in a world where you are outnumbered by the dead, who are trying to eat you! In the primer show, the central character awakens from a coma, much like 28 Days Later.  Whatever stopped civilization from spinning has already taken place and “now” is the aftermath.  Altering that, where Fear TWD begins is just at the inkling of something terrible on the way.  It takes place at the brink of the devolution and the characters experience the transition first hand.

I confess that I am a huge TWD fan, so I was beside myself waiting for this show, since it was announced last March. And, how smart to capitalize on the successes already realized, yet also offer a view of this walker-filled world through an adjusted lens.

The central characters make up a blended family of partners and children. Like our pioneering group in Georgia, these are everyday folks.  No combat skills here either, just normal people. The opening scene was great, but what was strange and disconcerting was to see so many real people milling around and a city teeming with life in this world.

Now, I have personally faced facts long ago. I do not have apocalypse-ready skills, and I’m probably going out early.  It’s kind of terrifying to think of what it would be like to experience society’s demise.  But, boy does that make for slow TV.  I know that they worked hard to develop these characters and engage us while they trailblaze through Zombies 101, but we already took that course. In fact, many of us could argue our dissertations on the merit of weapon choice alone. We’re eons ahead and it’s a big adjustment in point of view. Not to say that we don’t care about first world problems, but we watch other shows for that. We want walker world problems!!  Plus, we are already desensitized to the blood and gore that is so horrifying to these newbie characters.

It took a good 45 minutes into the show for the pace to start picking up. And along the way, I noted several scenes that I hope were homages and not rip offs to other vehicles. I realize now after some consideration, what should keep me on the edge of my seat is waiting and watching for these characters to get where they, and we, need them to be. They don’t have the benefit of an expository character, such as Morgan in TWD 101, to explain to them what is happening and how to deal with this threat. They will have to figure all of this out by trial, and likely other people’s, error. I think that we should give them some time to figure that out. Savvy thinking though to launch this show before the Fall season gets going, and there are very few shows to feast on.

I will be there next week to see how they get on with it as the numbers of the living dwindle, and the undead rise. Let’s hope that the show does not succumb before we see that happen.

Recommendations:  For other zombie fare, watch the seminal show The Walking Dead, World War Z or Shaun of the Dead.