Beasts of No Nations is a stirring film. It follows Agu, a youngster living in the turmoil of what is assumingly war-torn Africa. We are shown how his world instantly changes with a revolutionary occupation. The country is not named and the warring groups are referred to only in acronyms. The importance is that it creates the shift in landscape, forcing Agu to fall in with rebels conducting their own war of retaliation upon the other factions. With no options, Agu remains with the rebels, the rebel leader takes on Agu as his charge, placing him dangerously at the forefront to witness first-hand, more than anyone should, about death and the perils of war. Idris Elba is charismatic and captivating as The Commandant. It is clear why the others follow, though his revenge-filled rhetoric provides the basis for belief in a victory that is never attained. Abraham Attah gives an exceptional performance. Largely scripted with interior monologue, Attah delivers a performance that belies his youth. 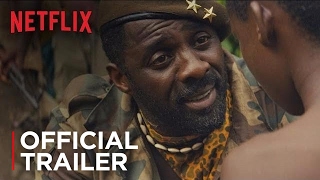 The film is long and the story is heart-wrenching. In my view, the key points of contrast are Agu’s naiveté and innocence at the opening of the film compared with his war-shrouded view at its conclusion – its key message perhaps delivering hope in the resilience of children.  (Click photo to view the trailer)

Cindy Says:  This is a serious and moving film, worthy of 🌟🌟🌟🌟 stars.

Recommendations:  If you like this, also look for Hotel Rwanda and Sometimes in April, also starring the gifted, Idris Elba.