I grew up hearing the terms Cold War and Iron Curtain, but was so young that I wasn’t really sure what it meant at that time.  After the World War II conflict was resolved, differing political, social and economic ideologies turned former allies into adversaries.  These differences kicked off the Cold War which was ongoing between 1947 and 1991, and was a state of constant political and military “tension” between Western Bloc and powers in the Eastern Bloc.

This drove military and political posture in the US and the escalation was fodder for what has become a genre of films (Bond, James Bond) as well as a flood of TV shows in the 60’s:  I SPY, Get SMART, Mission: Impossible, The Avengers, Wild Wild West, The Saint and notably The Man from U.N.C.L.E.  None fought against the Soviet regime per se, but all were fighting, against something that was usually an elusive conglomerate of evil characterized by an acronym — fun names like THRUSH, KAOS, SPECTRE…

Fast forward… wow 50 years!  Of course we have seen spy movies galore, with the Bond films and MI franchises to name a few.  We even saw a look back, and forward, and back again with the spy spoofing Austin Powers trilogy.  Now, we venture back to the 60’s again with a more action packed lens.  I’m surprised that we haven’t seen this reboot before now, but the return is timely especially with the successful influx of television series like The Americans, The Assets and Deutschland 83 forging the path to the Cold War past.

There’s no need for updating here as the plot doesn’t necessarily work today. Set in the early 60’s, we meet our super spies, first on opposing sides of a mission —  then forced to partner up to prevent a nuclear weapon, and it’s blueprint, from falling into nefarious hands. 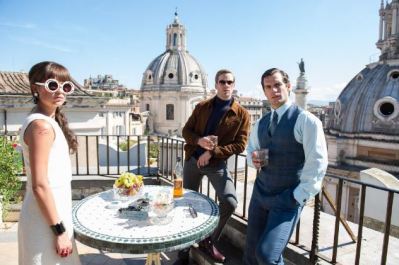 I have to admit that when I heard that Guy Ritchie was directing The Man from U.N.C.L.E., I had high hopes for this film.  I am a fan of his work be it Snatch and RocknRolla, or the recent Sherlock Holmes films.   But, it’s been awhile since we’ve seen anything new and it’s hard to predict.  I certainly was not disappointed with this one, not to mention the visual treat of Henry Cavill as CIA agent Napolean Solo and Armie Hammer as KGB operative Illya Kuryakin for 120 minutes.  I thought that these two had good chemistry as the teamed-up rival agents. Swedish born Alicia Vikander certainly holds her own.  Expect to see a lot of her in the near future along with Elizabeth Debicki. Jared Harris as Sanders and Hugh Grant’s Waverly are near perfect in their old dog roles. There’s even a quick lesson in the beginning setting up the Cold War and Iron Curtain for those who might not know the history.

All in all, Guy created a really stylish and snappy spy movie any way that you look at it. Spy gadgets were present, yet appropriately and sufficiently low tech.  There’s the trademark Guy Ritchie fancy camera and framework.  He did a great job capturing the period from cars and gorgeous wardrobe to the amazing music.  Composer Daniel Pemberton delivered a great score keeping it appropriate for the decade, yet also fresh:  the perfect accompaniment and backdrop.  And, we even learn what the U.N.C.L.E. stands for.

There were a couple of things that bugged me.  I thought that there were a few modern idioms that shouldn’t have slipped their way into the dialogue as that can break the illusion. Also, the Kuryakin character was just a little too stiff and “strong like bull” for me.  However, that wasn’t enough to detract from the film.

If you like a good fluffy, spy romp, then this is for you. It is effervescent and light and a popcorn movie that is worth a look.  (I personally plan on checking out the soundtrack.)  Of course, it is set up for sequel – which I would totally see – but not sure if the box office will warrant another UNCLE mission. In the U.S. market, it opened against some stiff and buzzworthy competition and is being overshadowed.

Recommendations:  If you like this, rent Kingsman: The Secret Service and perhaps some Brosnan Bond?  And, if you haven’t seen Ritchie’s Snatch, you should.

Your turn:  Do you like your spy movies funny or serious espionage?